Lightning Rod is a powerful storm giant who can be found in Skylanders: Spyro’s Adventure. He is very talented with the element of air. Lightning Rod is extremely strong and considers himself to be super macho. He is originally from the Cloud Kingdom, a majestic place where other giants lived as well. Lightning Rod was always acting as a hero, taking care of his realm and helping others. This, coupled with his great smile and physique, left him quite famous with his people. He was a widely celebrated celebrity, and therefore is used to getting all of the attention.

He has a hard time sharing the spotlight with others, but he can still be charming and charismatic. One day, Lightning Rod happened to meet Spyro, who told him about grand adventures and dangerous pursuits in faraway places and realms. Lightning Rod was entranced by the story and bravely asked to join in the fun. Soon after, Lightning Rod met with Master Eon, who asked him to join with the Skylanders. Maybe he did it to get more attention, or maybe he is a genuine hero. Either way, Lightning Rod is using his strength to protect all of Skylands.

There is a Series 2 Lightning Rod. He’s also available in a 3-Pack with Cynder and Zook.

Back and better than ever, Series 2 Skylanders Giants are returning from Skylanders Spyro's Adventure with new "Wow Pow" power upgrades and increased level cap "One Strike and You're Out!" says Lighning Rod. For generations, the Skylanders have used their magical powers and weapons to protect Skylands. But now, an evil tyrant has frozen them and banished them to Earth. Only you can put them on the Portal of Power and bring them to life to save Skylands once again. Collect and build the ultimate army of Skylanders Giants! Each Skylander Giant has their own unique powers and abilities to enhance your game play experience and save Skylands again. Bring your Skylanders Giants to life by placing them on the Portal of Power! Lightning Rod prides himself on being the most macho of all the other storm giants in Skylands, though he isn't used to sharing the spotlight. He is brave, but can also be charming and charismatic. Lightning Rod once lived in the majestic Cloud Kingdom, where his countless acts of heroism along with his winning smile and electric physique made him the most famous storm giant in the realm. He was a true celebrity, and the palace halls were littered with statues of the chiselled hero. But all the praise and admiration could never quite satisfy Rod, who yearned for something more. As luck would have it, he met an adventurous young dragon named Spyro, who told him fantastic stories of faraway places and dangerous adventures. Rod was spellbound, and he set off with Spyro to seek an audience with Eon to join the Skylanders... but not before the storm giants threw a going away party that lasted for twelve days. Each Skylander Pack includes - Skylander figure, trading card, sticker sheet, and web code 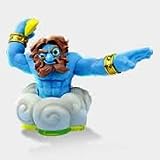