Sunburn is a very unique and extremely rare phoenix and dragon hybrid. He is available in Skylanders: Spyro’s Adventure, but only through the Dragon’s Peak adventure pack. He is very talented with the element of fire. Sunburn is a tricky prankster who totally hates evil. He was born in the middle of a very hot and very active volcano, soon being shot out into the world after an eruption. Sunburn is proud of his heritage, and he is the only phoenix and dragon hybrid of his kind known in all of the Skylands worlds.

He is unique, but this makes him a huge target for those who want to do harm, such as dark wizards and bounty hunters. Whether they’re looking to make some money or become more powerful, these wrong-doers are especially curious about Sunburn’s ability to shoot fire and teleport. After noticing Sunburn’s power, Master Eon quickly invited him to join the Skylanders. Becoming a part of the team has given Sunburn the opportunity to fight against evil, but he gets some other benefits as well. Having other friends in the Skylanders crew has allowed Sunburn to feel more safe and protected.

Sunburn is available in the Dragon’s Peak Adventure Pack: 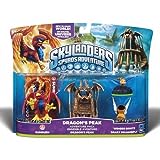