Chop Chop is a very scary Arkeyan warrior who is affiliated with the element of the undead. He can be first seen in Skylanders: Spyro’s Adventure, though he also makes an appearance in Skylanders: Giants. Chop Chop is a skeletal creature who was once an Arkeyan guard, being created with undead magic and technology.

He protected his civilization for a long time with his amazing powers, but eventually got tired with his duties when things began to quiet down. He marched around, searching for one of his creators to give him new orders, but all he could find were the machines and technologies left over by the vanished Arkeyan race.

Being very dedicated and loyal to his creators, Chop Chop continued to search, and eventually he was found by Master Eon. Chop Chop is very talented with his sword and shield, both made from an indestructible metal. Now he uses his skills and talents to protect the Skylands and beyond from the forces of evil!

Chop Chop also has a legendary counterpart named Legendary Chop Chop. He is exclusive to the legendary pack that can be only found at Toys ‘R’ Us stores (or online at Amazon.com). 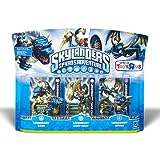