Slam Bam is a big and burly blue yeti who is very talented with the element of water. He can be found in Skylanders: Spyro’s Adventure only through the Empire of Ice adventure pack. He is also offered as a single pack figure in Skylanders: Giants. Slam Bam used to spend his free time enjoying life on a floating glacier. He could go sledding on snow hills, make huge ice statues, and eat lots and lots of delicious snow cones!

Slam Bam didn’t realize it, but he was being watched by the evil Kaos, someone extremely jealous of the special secret ingredient that made the snow cones so delicious. Kaos watched, hoping to catch a glimpse of just what the secret was, but his plan didn’t work, so he destroyed the glacier! Talk about an overreaction! The ingredient happened to be nothing more than some peppermint. With his home destroyed, Slam Bam drifted around on the tiny remains of his glacier, eventually landing on Master Eon’s island. After some conversation and yummy snacks, Slam Bam agreed he would join up with the Skylanders.

Slam Bam is also available in the ‘Empire of Ice’ Character Pack. This gives you a whole new gameplay level along with two magical items: the ‘anvil rain’ and ‘sky iron shield’. There is also a ‘Legendary Slam Bam’ figure. 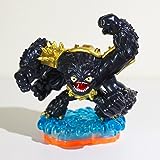 Bring your Skylanders to life! Frozen in our world. Alive in Theirs. For Generations, the Skylanders have used their magical powers and weapons to protect Skylands. But now, an evil tyrant has frozen them and banished them to Earth. Only you can put them on the Portal of Power and bring them to life to save Skylands forever. Each Skylander has their own unique powers and abilities to enhance your game play experience and save Skylands.