Fright Rider is not one character, but two: Rider and his Ostrich Fright were a champion jousting team that won tournaments all over the world. Jealous of Rider’s accomplishments, a jouster cursed Rider and sent him to the underworld. Fright, anxious to reunite with Rider, ate a whole bag of skele-oats to help him venture into the underworld.

Forever grateful, Rider and Fright emerged from the Underworld and devoted themselves to fighting the forces of evil….as well as entering the odd jousting tournament!

There is also a special limited edition Glow in the Dark Fright Rider figure. 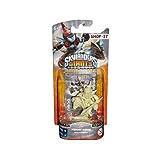 This exclusive and rare glow in the dark variant of Fright Rider has a limited production run and is a must for any collection. Rider and his magnificent ostrich, Fright, were the finest jousting team in all of Skylands. But after winning the championship for the 3rd straight year, a jealous competitor placed a curse on the elf that sent him to the Land of the Undead. Not wanting to be without his partner, Fright, who up until this point had been afraid of nearly everything, ate a bag of skele-oats that turned him into a skeleton so that he could brave the journey to the underworld to save his friend. Grateful for being rescued, Fright Rider returned to the surface dedicated to helping others - while still dominating an occasional jousting tournament from time to time!